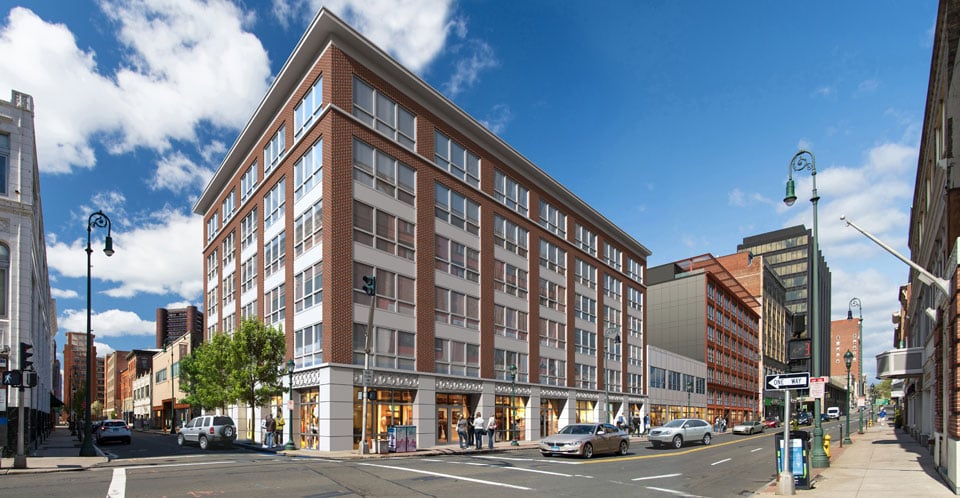 It is rare as an architect, to be able to make such a significant impact on a City that you love.  We appreciate the opportunity of working alongside Northside Development Company in strengthening this significant urban block in New Haven.

Within the historic nine square grid in New Haven sits the 800 block of Chapel Street (just east of the New Haven Green).  The corner site, 808 Chapel Street, is surrounded by a blue tarp fence.  Two lots west, 848 Chapel Street, is a paved parking lot that extends a full city block to Center Street.  The two-story building in between these sites, 832 Chapel Street, has a vacated second floor space in need of occupancy and a façade in need of an updated urban design.  The combination of these three adjacent properties has led to a deterioration of the urban fabric as shown in the existing picture below. 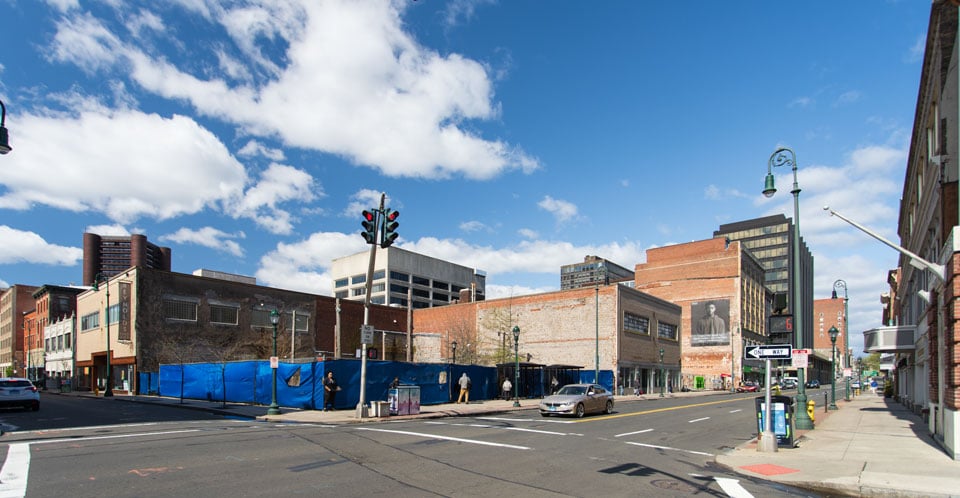 As part of their goal to redevelop a large portion of the prominent 800 Chapel Street city block (once a thriving retail center), Northside Development Company retained Kenneth Boroson Architects to design the two new buildings and the new façade.  848 Chapel Street (more information on our webpage and in our blog) received site plan approval from the New Haven City Plan Commission in December 2018.  808 Chapel Street received a similar site plan approval in May 2019.

The currently underutilized site will feature a new six story mixed use building, shown in the streetscape elevation above.  The building will contain 46 apartments with a mix of studio, one bedroom, and two-bedroom layouts.  A typical floor plan and the street-fronting elevations are below.  There will also be retail space fronting on Chapel Street, resident amenity space fronting on Orange Street and in the basement, and usable open space set at grade between the new building and an existing building on Orange Street.  Parking for the new building will be housed within the neighboring existing building on Orange Street.  The building façade is reminiscent of a vernacular New Haven 1920’s urban building with a lighter stone street level façade and storefront.  Punctuated along the stone lintel is an intersecting circle ornament pattern.  Above the street level space, a "new brick" material reflects the surrounding existing brick buildings.  Large glass windows allow natural daylight to reach deep into the retail stores and residential units. 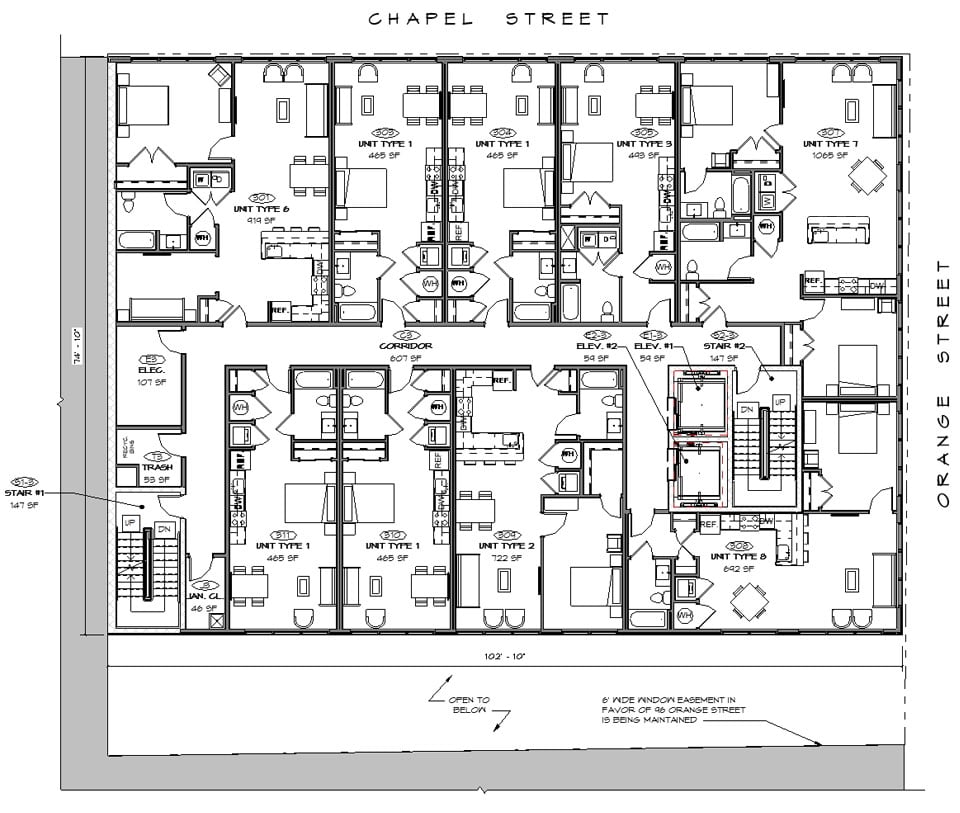 The two-story building will feature two new large one-bedroom apartments on the second floor.  The first floor shall be renovated and house a new retail store.  The windows on the second floor will be extended to create larger amounts of glass that align with the first-floor column structure.  The façade is a simple aluminum panel grid. 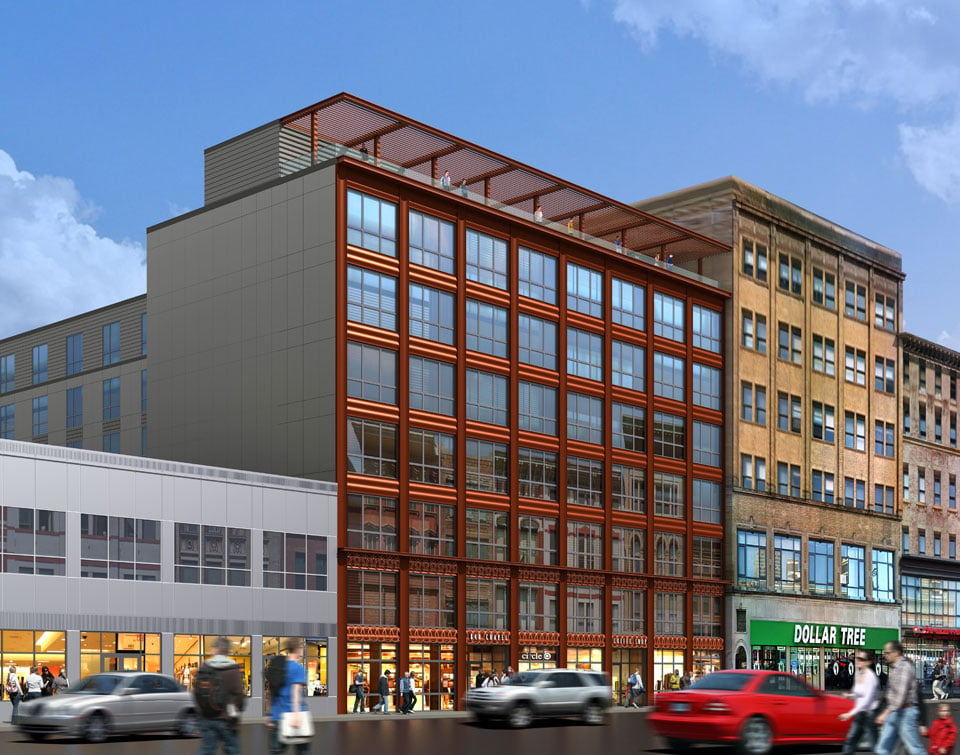 The apartments will be a mix of studio, one bedroom (some of which will include dens), and two-bedroom layouts.  The units will be a bit smaller than average market rate apartments to keep the rent a bit lower and provide better housing choices for people of different income levels to be able to live in downtown New Haven.

The main entrance and retail space will be on Chapel Street and the garage entrance will be on Center Street.  Portions of the building are held back from the property line within the block to provide views and space around apartments.  There will be roof decks on the second floor and at the top of the building for resident use.  The floor plans are below starting at the lower level and working up through the first floor, second floor, typical floor, and roof. 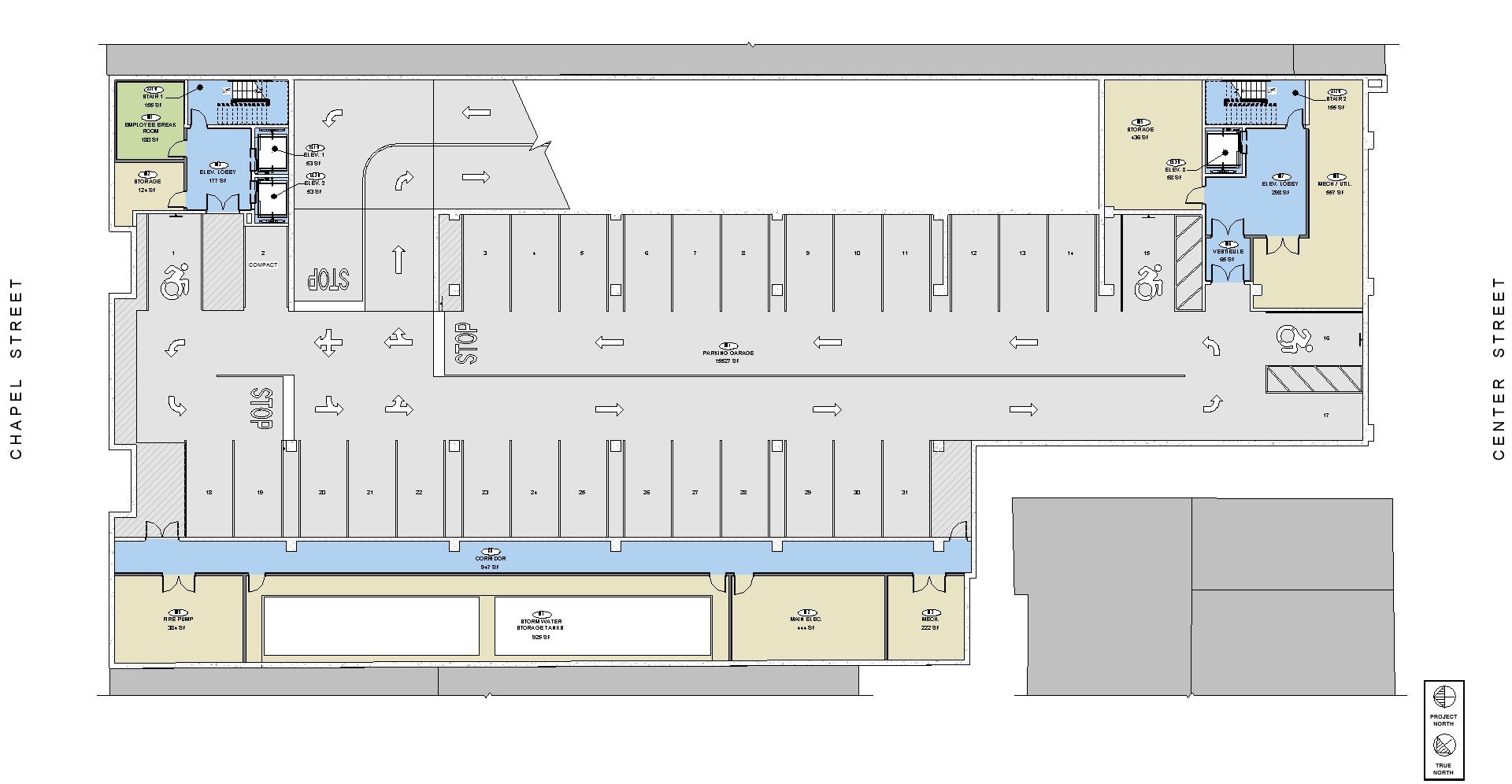 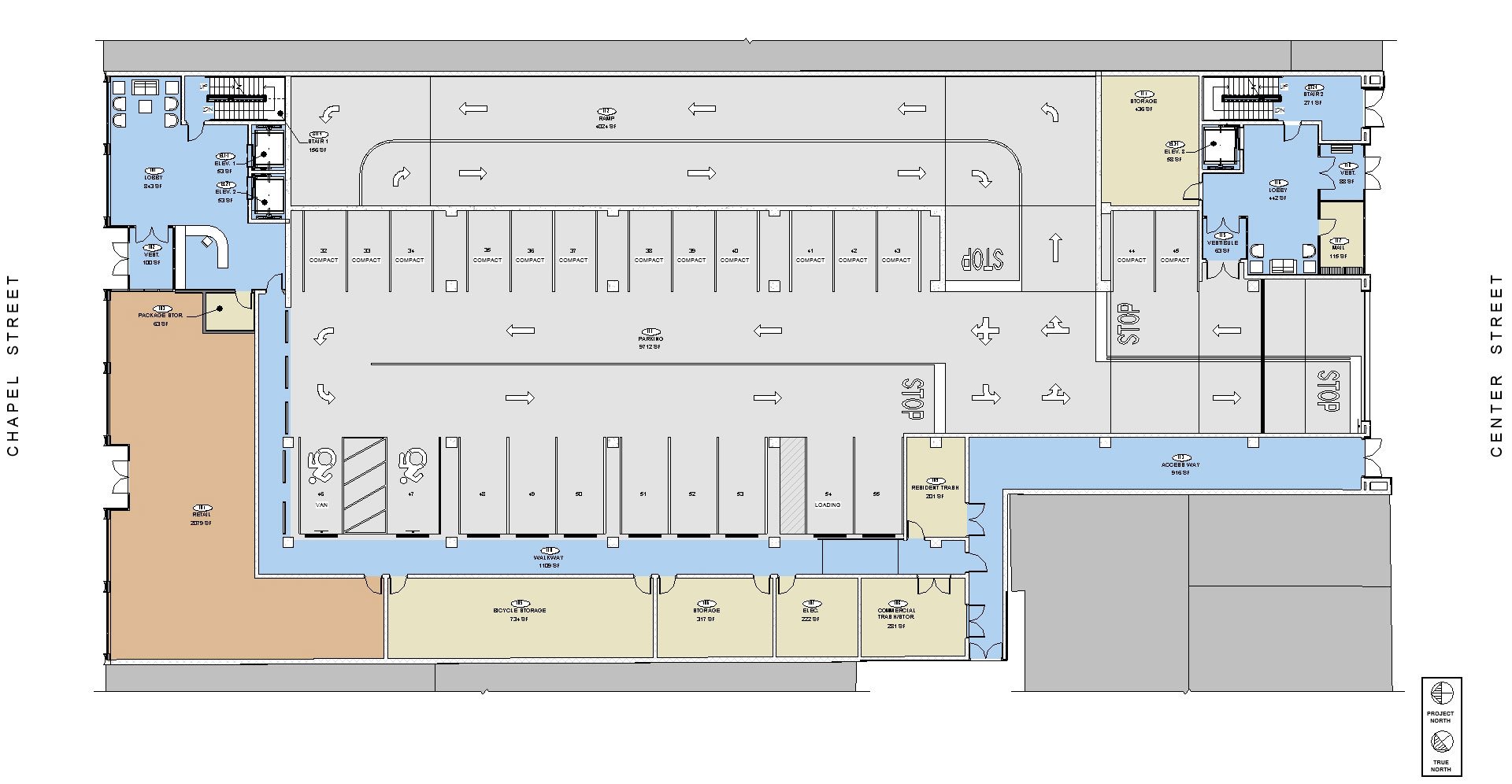 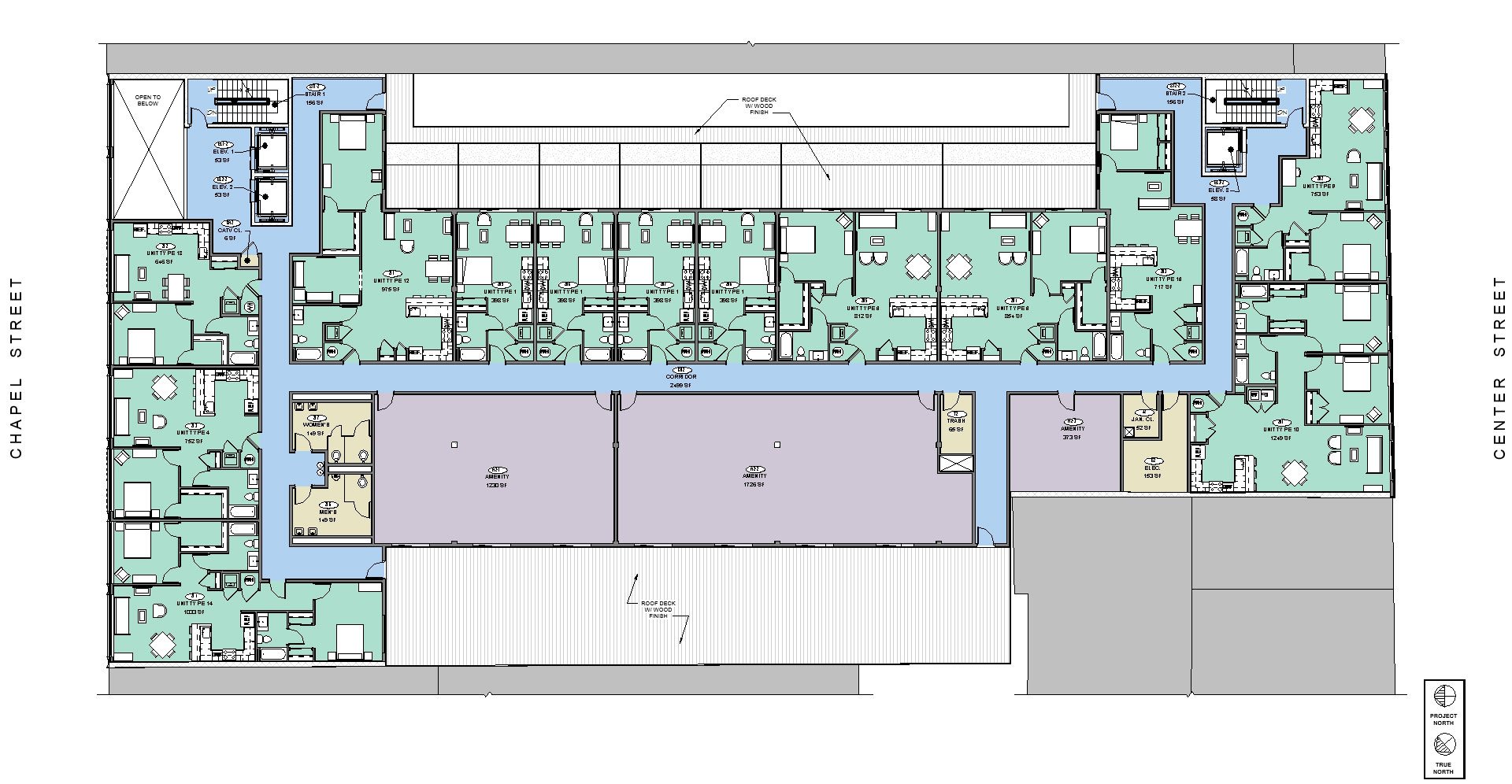 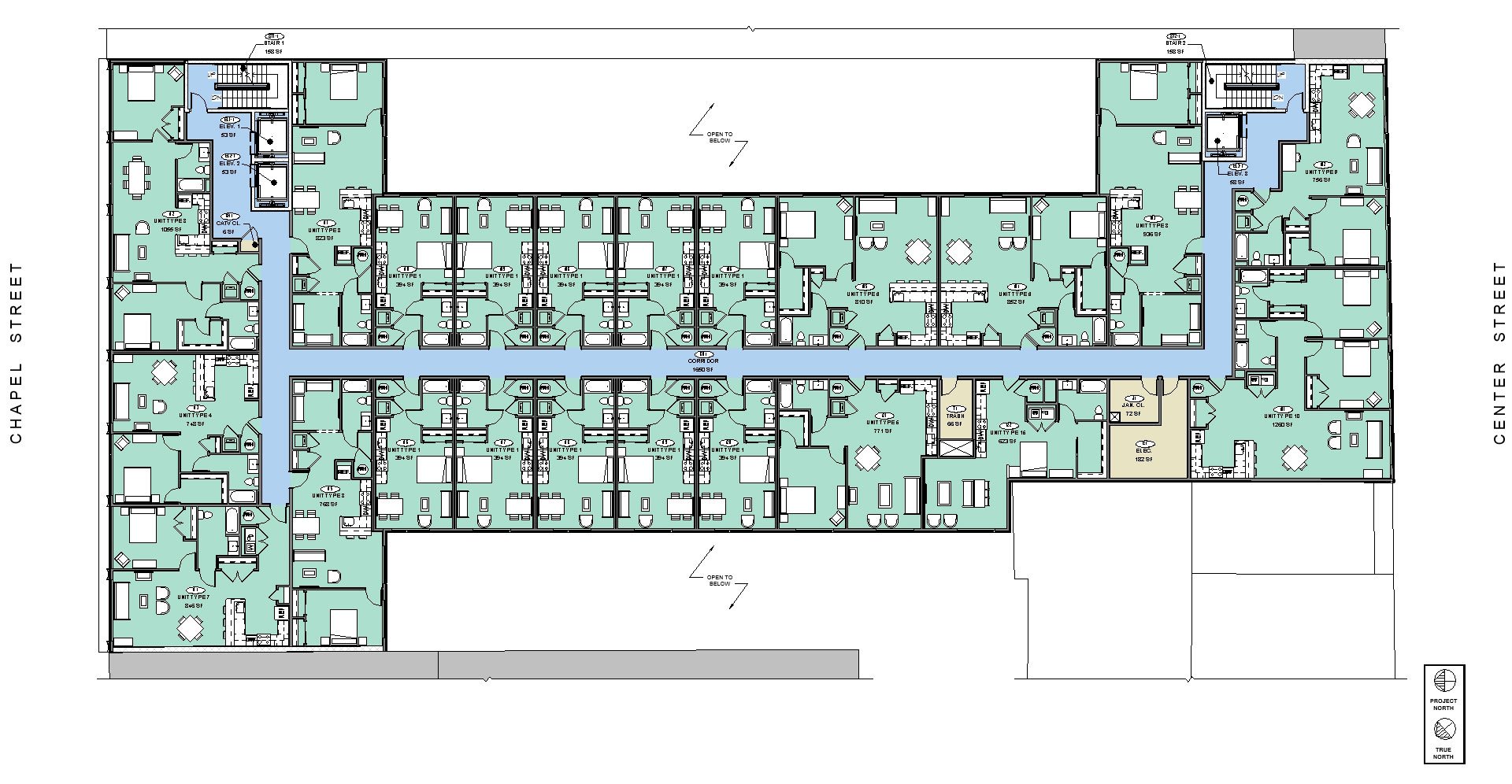 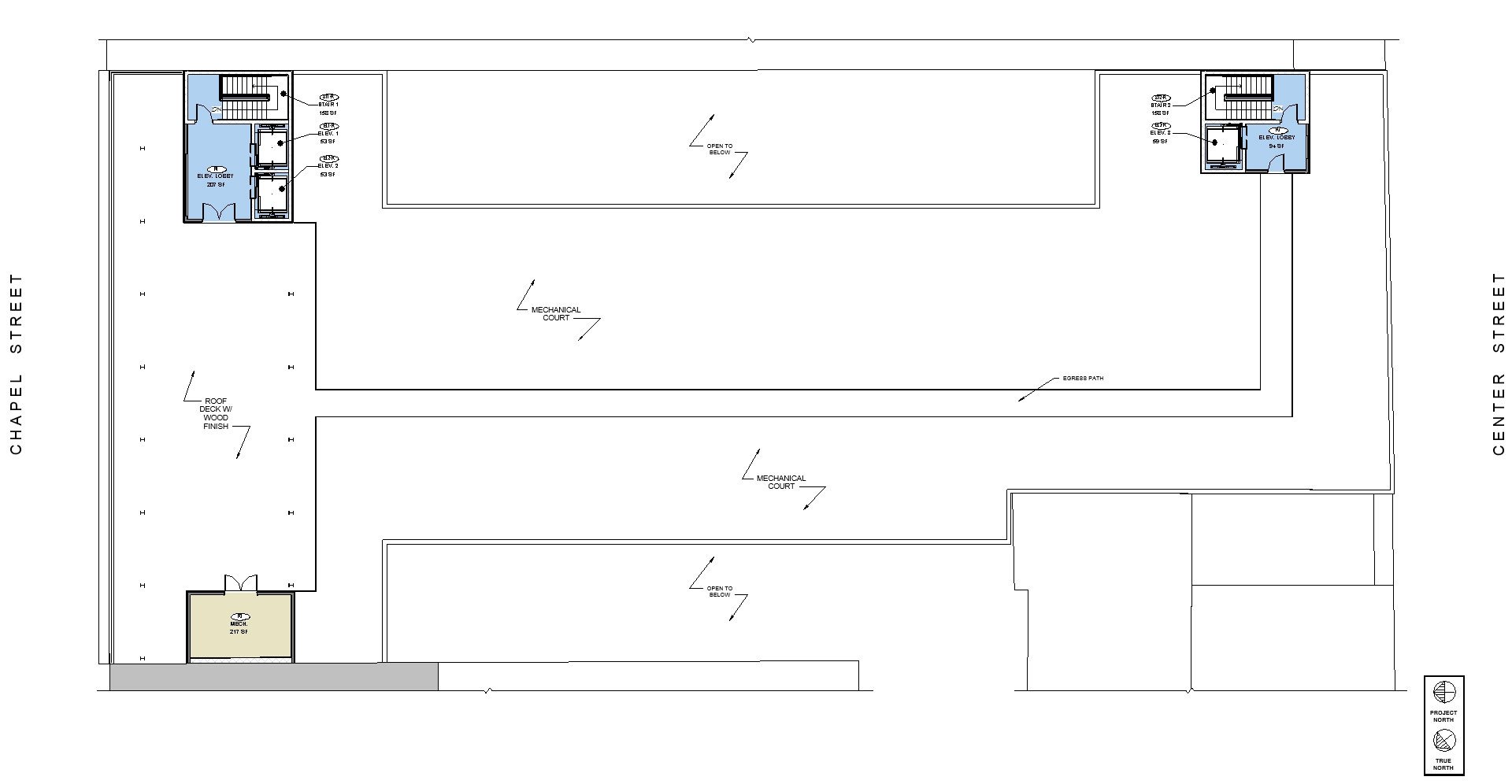 The building’s Chapel Street façade will feature a sleek terra cotta colored metal clad structure with large glass windows to allow views of the soon-to-be bustling downtown block.  Two bands of architectural ornament (one above the street level windows and one above the second-floor level windows), enrich the streetscape by adding visual interest and vitality.

The three-site development at 808 Chapel, 832 Chapel and 848 Chapel will revitalize the connection between the Ninth Square, the State Street train station and the historic Wooster Square neighborhood.  By adding at total of 168 residential units and up to 6 new retail spaces, downtown New Haven’s renaissance as one of the most desirable and fastest growing Cities in the US (see Bloomberg report) will continue to blossom.