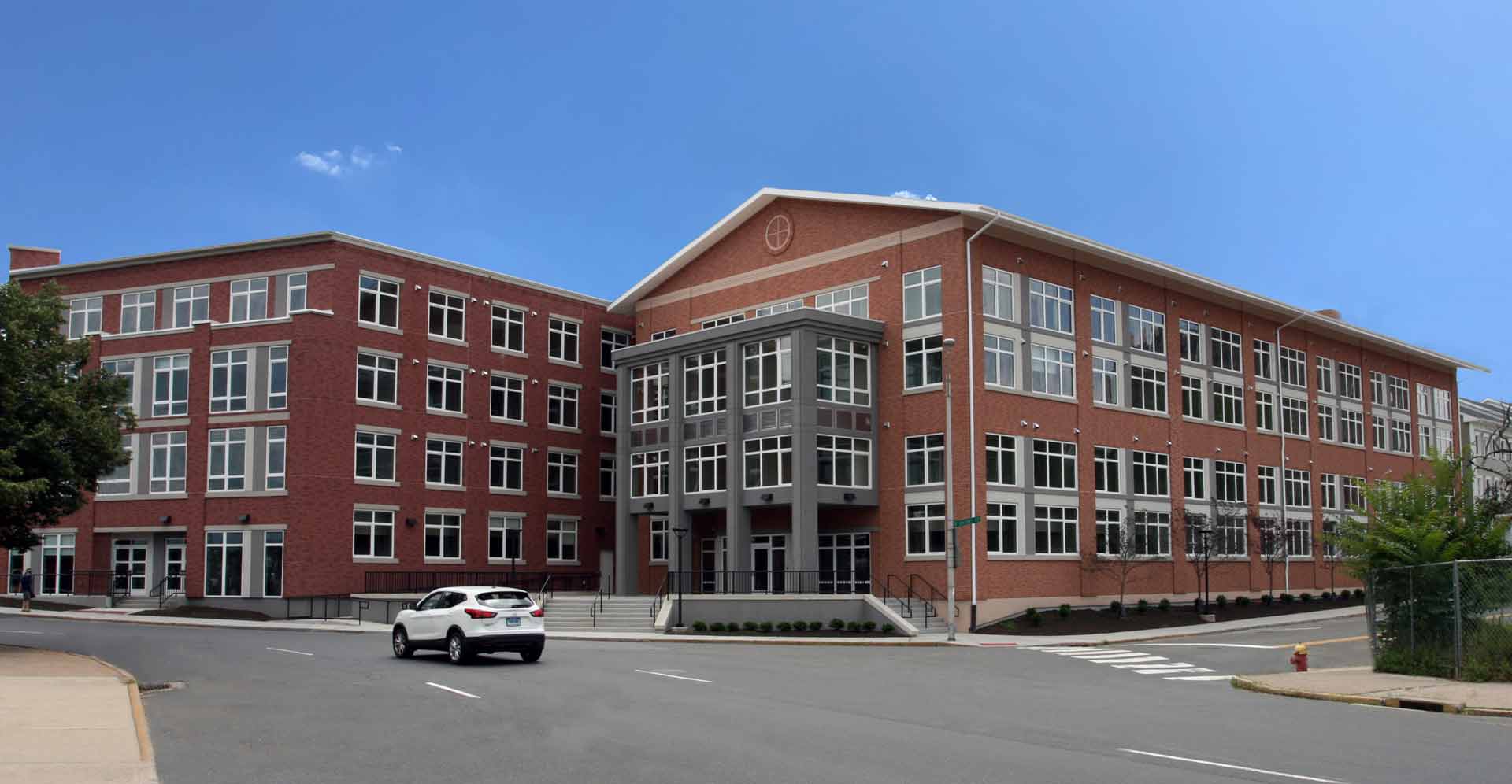 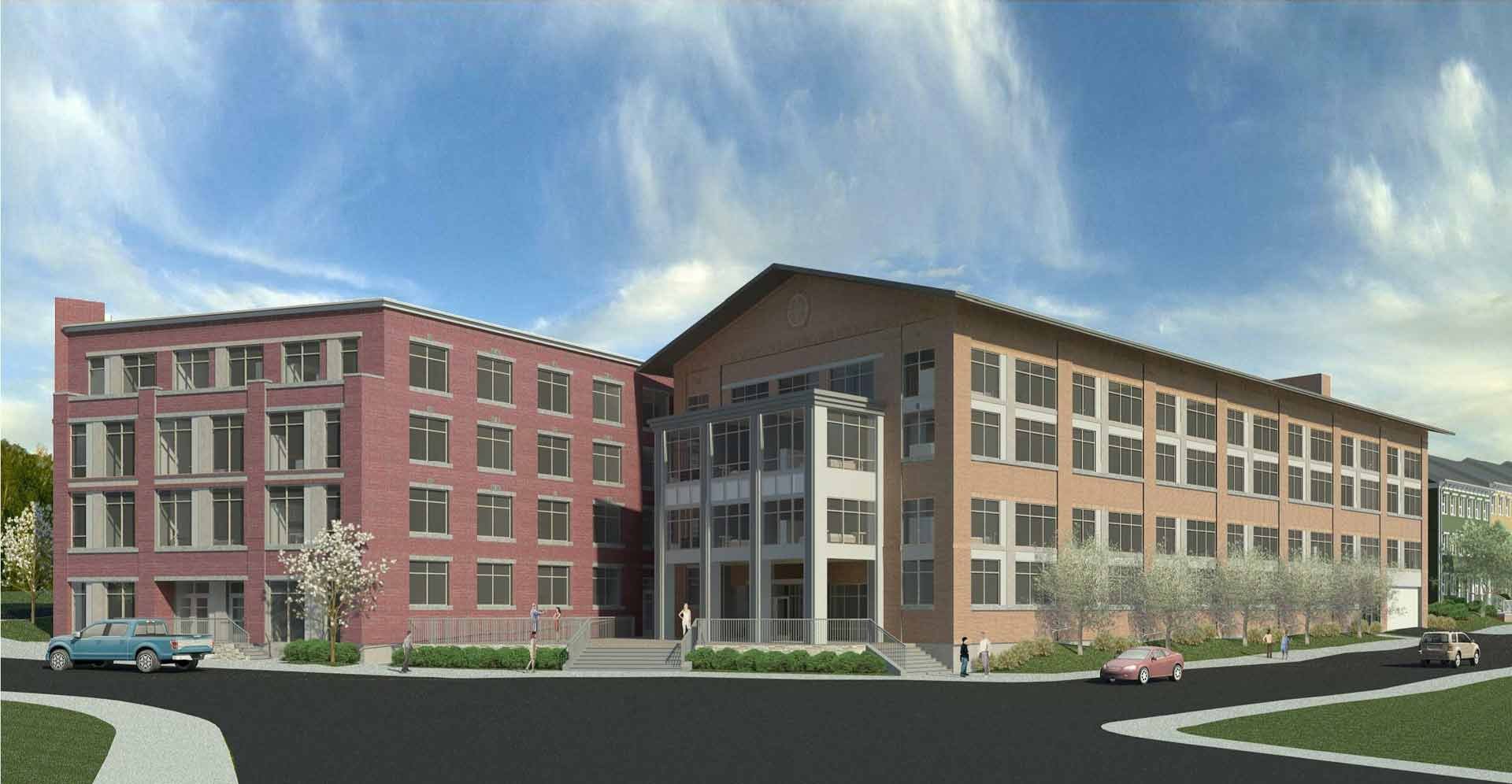 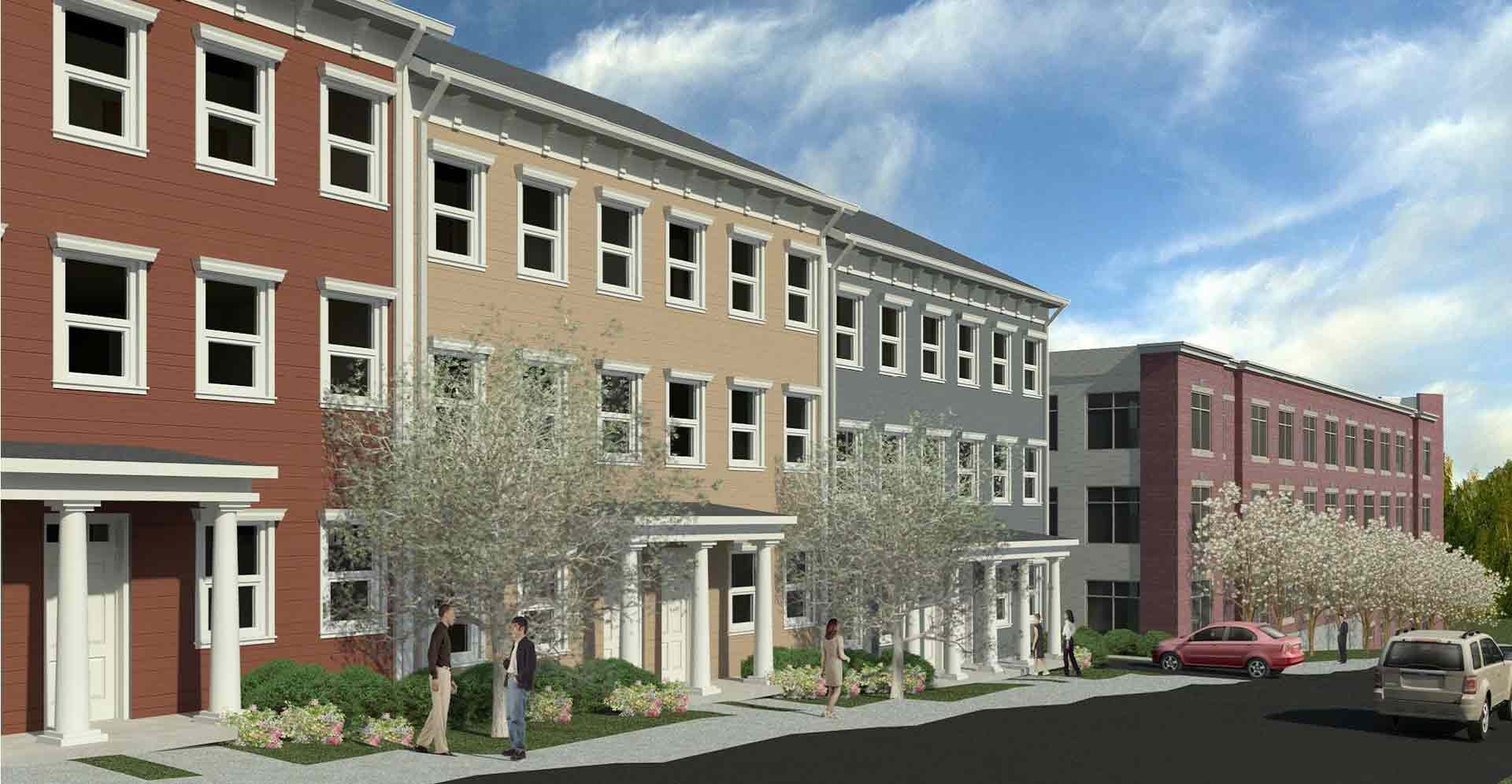 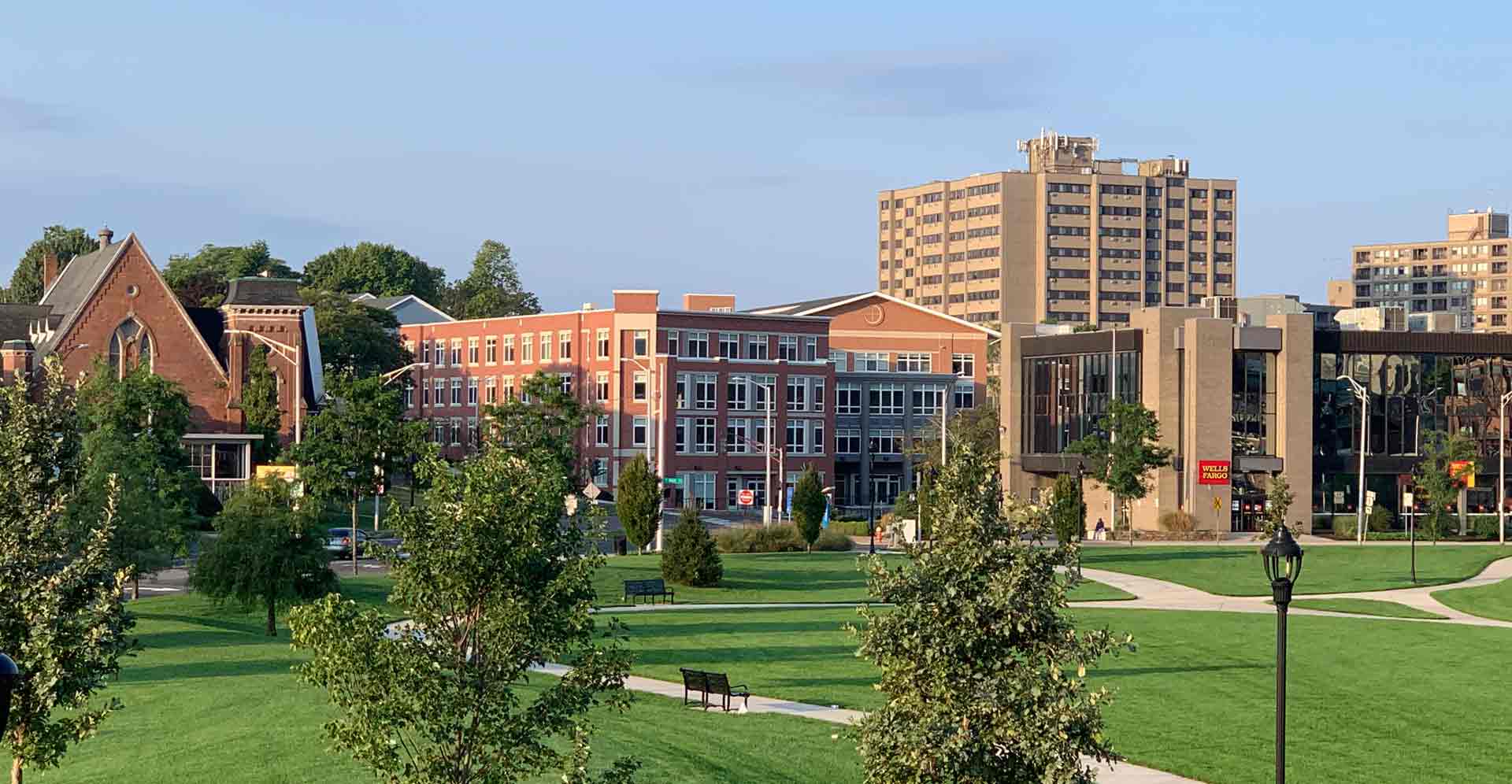 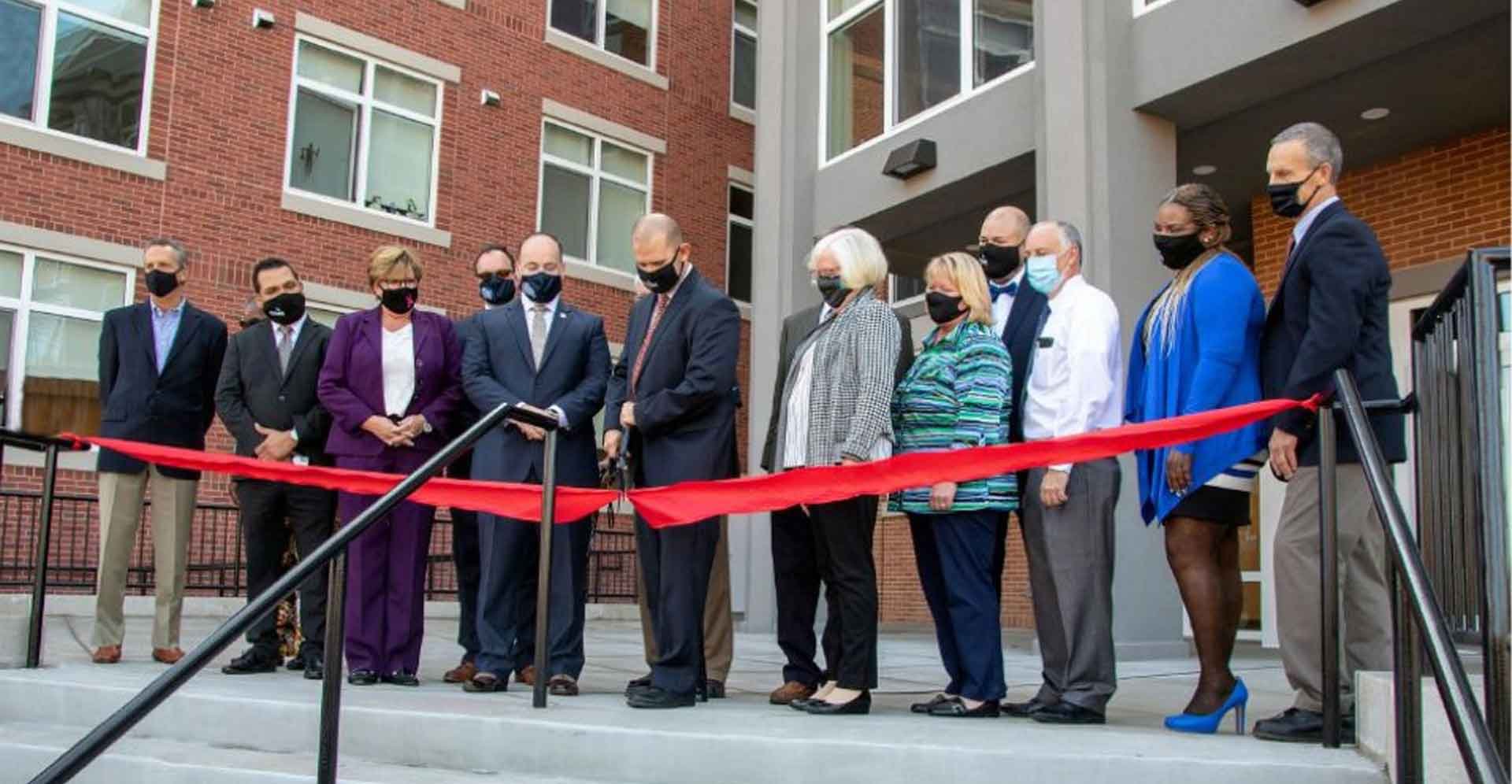 The team of Kenneth Boroson Architects, Torti Gallas + Partners, and Michaels Development was selected by the City of Meriden to develop the 1.6-acre site at the intersection of Crown, Perkins, and South Colony Streets. This Transit-Oriented Development District, established in 2014, included the former office of the Record-Journal newspaper.

Challenges included a significant amount of ledge and a steep, geometrically-complex, constrained site. In addition, a corner portion of the site is located within the 500-year flood plain.

This new construction project now consists of three separate buildings. The former office building was demolished and replaced with a 4-story elevator building which includes 63 apartment-style dwellings, a parking garage, and a 5,816 sf office/conference space. Two additional buildings include a total of 18 three-story townhome units. Of the 81 total dwellings, 80% are affordable and several are accessible Type A units.

The development was designed for Passive House construction in compliance with the PHIUS+ certification criteria – an affordable and highly energy efficient construction standard based upon climate-specific comfort and performance. As part of PHIUS certification, the structures are required to comply with various DOE, EPA and Energy Star requirements.

The project was awarded 9% Low Income Housing Tax Credit (LIHTC) funding from the Connecticut Housing Finance Authority (CHFA). The site was acquired by the City via a HUD Sustainable Community Challenge Grant.

The development is a significant part of Meriden’s goal to transform its downtown in light of the New Haven/Hartford/Springfield commuter rail program, known as CT-Rail, which was completed in 2018. Residents of 11 Crown may access the rail platform via a five-minute walk.

In 2021, Kenneth Boroson Architects received a Sustainable Architecture Award from AIA-Connecticut for the design of the 11 Crown Street Development. This was one of only three properties to receive this important award.